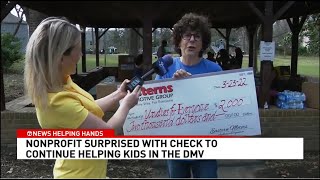 Helping Hands: Undies For Everyone

As of today, more than 5,000 students in Washington, DC are homeless or living in poverty, according to Partners for Kids in Care.

The non-profit organization, Undies for Everyone, provides new underwear to children and is expanding in the area. Thousands of pairs of underwear will be distributed to thousands of children in the D.C area.

“They love being able to get it, and we love giving it to them with designs on it,” said Amy Weiss, CEO of Undies for Everyone.

Weiss’ nonprofit organization, Undies for Everyone, which has expanded across 16 cities in the United States, has donated millions of pairs of underwear. Weiss says the basic need for underwear is overlooked.

Joel Bassam with Easterns Automotive Group wanted to help students in the district by giving Undies for Everyone a helping hand.
“Undies for Everyone is an amazing organization supporting over 100,000 kids across the United States and 5,000 kids so far in the Washington D.C., market. We want to help get that number up and support more kids in our market by donating $2,000 to your cause so you can continue helping kids that are most in need and supporting their self-esteem.”

Weiss was filled with joy and expressed how this would help so many children in the D.C. area. Undies for Everyone also encourages companies to get involved by helping to pack and donate pairs in their community.