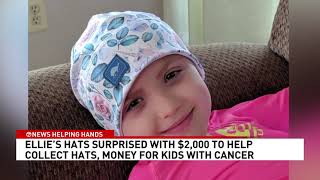 Ellie was a kindergartner at Jay Coakley’s school diagnosed with acute lymphoblastic leukemia in the spring of 2013. She had lost most of her hair by the time she was in kindergarten and wore hats every day to school.

Coakley bought her many hats and later set up a non-profit organization called Ellie’s Hats to help other pediatric patients. “What I learned along the way is the hats are great for the kids,” Coakley said. “But there is a financial burden from families due to their child being treated for cancer.”

Ellie’s Hats has evolved beyond hats to support families financially. Through Ellie’s Hats, they created a program that gives $1,000 to 5 families in need a month and has helped 175 families with a monetary donation.

As a part of this 7 News Helping Hands, Joel Bassam of Easterns Automotive Group joined with a special surprise for Jay Coakley and Ellie’s Hats.

“Ellie’s Hats is such an amazing story, started by helping one person and blossoming into a way to help as many people as possible by granting wishes,” Bassam said. “The way you are sticking to your singular goal of brightening a child’s day is incredible. We want to help you continue to do that by donating $2,000 to your cause to continue to brighten as many kids’ days as possible. Continue doing the amazing work.”

Instead of helping five families next month, this allows them to help seven. They have currently given away $150,000 to families in need, which puts them one step closer to their goal of giving away $200,000!