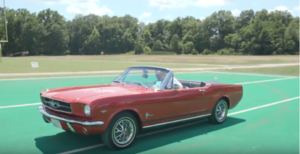 We?re back with another edition of Redskins Rides! It?s a great week because the Washington Redskins are still leading the NFC East at number one. Easterns Automotive Group (Eastern Motors) had the pleasure of meeting up with skins fan, Lyle Kellman at Redskins Park in Ashburn, Virginia. Kellman is the proud owner of a 1964 ? Ford Mustang Convertible in Rangoon Red. He added his own twist to the vehicle by adding Redskins memorabilia to give it a custom feel. Kellman also installed Rally wheels, upgraded the suspension, and had the engine rebuilt. You definitely don?t see Mustangs like this one too often. Nice ride, Lyle! On behalf of the Easterns family, we want to wish you all a happy and safe holiday season. Please stay tuned for more Redskins Rides in DC, Maryland, and Virginia community. Easterns and the Washington Redskins got you covered! #HTTR