Easterns Automotive Group partners with ADESA at NADA Charity Auction to raise over $94,000 for Canine Companions

Every year the biggest and most important figures of the automotive industry come together and gather at the NADA Convention and Expo. For those unfamiliar, NADA stands for National Automobile Dealers Association. The entire convention lasts for weekend an entire weekend with different events, exhibits, and seminars happening on each day. This is the time when the car dealers are able to meet face-to-face with the top tier executives of the major auto manufactures. The NADA Convention is something that car dealers truly look forward to each and every year because it brings together car dealers from all over the country. Consider this event a giant family reunion for automotive industry.

The special aspect about the NADA Convention is that is in a different city every year. This allows everyone the opportunity to network and enjoy the same festivities in a new city. The NADA Convention for 2017 was just held in New Orleans, Louisiana at the end of January. 2017 marks a special year for NADA because they are celebrating 100 years of service to dealers. Robert Bassam (CEO) and Joel Bassam (Director of Marketing) went to represent on behalf of Easterns Automotive Group. According to them, the highlight of the convention did not really involve cars in particular, it involved giving back. Hearing this is not a surprise since charity and giving back are a huge part of the Easterns DNA. Easterns has a long-running relationship with ADESA Auto Auction. ADESA made the charitable choice to auction off vehicle for the Canine Companions for Independence nonprofit organization and the NADA Foundation. Robert Bassam placed the first winning bid of $39,000 for the Polaris UTV. After Robert won the Polaris, he decided to donate it back to ADESA to be re-auctioned. The Polaris was won again by Joe Verde, president of Joe Verde Group in San Juan Capistrano, California who placed a bid of $26,000. Mr. Verde also donated the vehicle back to be re-auctioned. The vehicle was won a third time by Joel Bassam who laced the winning bid of $28,000. The combined total of the money from the auction and the cash donations came to $94,423.

For those unfamiliar, Canine Companions for Independence is a non-profit organization that was founded in 1975. The purpose of this organization is to provide highly trained assistance dogs to enhance the lives of people with disabilities, particularly veterans and children. Retired Army Sgt. Steve Blackman and his service dog, Gottlieb, attended the NADA convention this year to represent Canine Companions. He was able to speak on his disabilities and how having a service dog not only gives one companionship but also offers immense help and support. The NADA Foundation supports various causes such as emergency medical care as well as higher education. It?s certain to say that the money raised this year will definitely be put to good use. 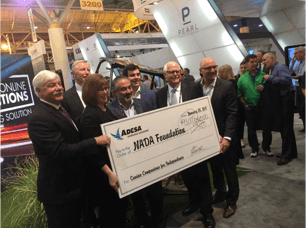